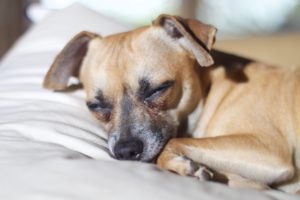 Fear and anxiety are two of the most common behavior problems we see in dogs. These issues not only strip dogs of any confidence, but they can also cause aggression. Though some dogs are born more timid than others are, fear or anxiety is often the result of negative training experiences.

One of the biggest mistakes owners make with their dogs is giving them inconsistent or variable expectations or commands.
It’s not uncommon for owners or family members to use different words for the same command, sometimes using “get down” and “down” interchangeably, for instance. This confuses dogs, which causes anxiety.
Or…
The wife might allow the dogs on the couch with her, but they’re not allowed on the couch with the husband. The dogs are allowed to jump up on family members but not allowed to jump up on visitors.
If you have different rules for different situations, dogs don’t understand what is expected of them, which also causes anxiety.

The best thing you can do to reduce fear and anxiety in your dog is to become consistent in your expectations for them. Once dogs know what’s expected of them, they become confident.
If you have a fearful dog, it’s important that you let your dog work through their fear. For instance, if dogs are afraid of something, don’t comfort them because this will reward their fear. Instead, act confident, and they will follow suit.