One of the smartest and most trainable breeds of dogs, German shepherds are very popular in the United States and all over the world today.

With an experienced dog trainer, German shepherds can be taught to become the perfect protection dog as they always display a high level of loyalty towards their owners. But if the training was done improperly, loyalty can lead to overprotectiveness, jealousy, and even aggressiveness towards other family members and people in general.

Where did the German shepherd breed come from?

As the name suggests, the breed was developed in Germany at the end of the 19th century by crossing several herding dog breeds. The result was a beautiful dog with a sturdy body and a courageous, strong character.

The breed creator gave his best puppies to the police for training and service, and soon German shepherds became the breed of choice for the military and police. Soldiers returning home from WWII brought the breed to the U.S., where German shepherd dogs became hugely popular, and were even featured in movies like Rin Tin Tin.

Unfortunately, that popularity caused increased demand for German shepherd puppies which led both to over-breeding, and breeding for cosmetic features rather than functional traits. As a result, a number of health issues became associated with this breed, including hip & elbow dysplasia.

Many people who liked German shepherds on the movie screen were not prepared to train and handle them in everyday life. Being shepherd dogs, they have a strong hunting drive and require special handling and rigorous exercise. If not addressed early on, the hunting drive can result in aggression towards dogs and other animals.

For a German shepherd to reach its potential and be a well balanced family dog, a trainer experienced with German shepherd dog training is a must, along with strong leadership and early socialization. 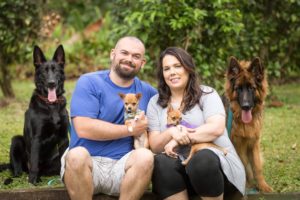 In addition to training many client GSDs, we have our own pack of German shepherds as our pets.

Our pack of well-balanced German shepherd dogs exhibit a range of temperaments, and all are obedient, lovable, and good with children and other dogs.

With our expertise in training German shepherds and our own dogs, we can train and socialize your dog properly and help them to become a calm and enjoyable companion for years to come.

Thinking of getting a German shepherd dog?

If you are thinking of getting a German shepherd, here are some things to consider.

Let's chat about how we can help you with German Shepherd dog training. You can also check out our Dog Training Programs & Rates.